Little seems to be known of Torres, other than the details of the voyage during which he sailed into what later became known as 'Torres Strait'. The following is an account of that voyage.

In 1606 both Dutch and Spanish vessels were voyaging within sight of the Australian coast. The story of the Spanish voyage is this. In 1567 an expedition from Peru under the command of Alvaro de Mendana had discovered the Solomon Islands, to the east of New Guinea. According to one account of the voyage, Alvaro would appear to have thought that he had actually discovered the Great Southern Continent of which men suspected the existence. 'The greatest island that they discovered was according unto the first finder called Guadalcanal, on the coast whereof they sailed 150 leagues before they could know whether it were an island or part of the mainland; and yet they knew not perfectly what to make of it, but think that it may be part of that continent which stretcheth to the Straits of Magellan; for they coasted it to eighteen degrees and could not find the end thereof. The gold that they found was upon this island or mainland; but because the Spaniards understood not the language of the country, and also for the Indians were very stout and fought continuously against them, they could never learn from whence that gold came, nor yet what store was in the land.'

Alvaro, named the group of islands the Solomons with the deliberate purpose of alluring other Spaniards to settle there since the Spaniards, supposing them to be those isles from whence Solomon fetched gold to adorn the temple at Jerusalem, might be the more desirous to go and inhabit the same. So, in 1595, he brought another expedition into the Pacific with that purpose in view. On his second voyage he discovered the Marquesas Island, but he could not now find the Solomons where he had been twenty-eight years before. It was no uncommon circumstance in those days for a navigator to lose his way at sea; and Alvaro had not been sufficiently precise in his reckoning to know their exact whereabouts. He died at Santa Cruz, a small group of islands south-east of the Solomons, before he had rediscovered the object of his quest.

One of the officers on this second expedition of Alvaro was Pedro Fernandez de Quiros. He was one of those Spaniards who believed that there was a Great Southern Continent which, from the vicinity of the Solomons, sretched to the Straits of Magellan. The acquisition of this continent would, he believed, be full of advantage for Spain. He laid his case before King Philip III, and as a result was commissioned to command three ships for the purpose of colonizing Santa Cruz and searching for the continent.

On December 21, 1605, the expedition sailed from Callao in Peru. The officer second in command was Luis de Torres. But Quiros was not able to manage his crew. They were mutinous, and, as Torres tells us in his relation of the voyage, 'made him turn from the course.' When the ships reached the island of Espiritu Santo, in the New Hebrides, they parted company. At midnight on June 11, Quiros's flagship, the 'St. Peter And St. Paul', slipped out of harbour, and, says Torres, 'although the next morning we went out to seek for them and made all proper efforts, it was not possible for us to find them, for they did not sail on the proper course nor with good intention.' It is to be inferred from Torres's language that Quiros's mutinous crew had compelled him to sail back to Peru, leaving behind the two other ships, with Torres in command of them.

Rather than abandon the voyage, and steer back to Callao, Torres resolved that he would not return until he had achieved some amount of exploration. This decision was not received agreeably by most of the other members of the expedition but the plan was proceeded with.

Torres, therefore, after satisfying himself that the land whereat they had been lying was an island, and not a portion of a continent, sailed till he fell in with the southern coast of New Guinea. Then for two anxious months he threaded his way through the reefs and islands of the intricate and dangerous strait which separates that country from Australia. He sighted the hills of Cape York (which he took to be a cluster of islands), made an acquaintance with the savage islanders of the strait, and, emerging into the open sea, steered at length for the Philippines, where he wrote an account of the voyage.

Quiros stoutly professed that he had discovered the Great Southern Continent, and in 1610 a narrative of the voyage was published wherein it was announced that 'all this region of the south as far as the Pole' should be called 'Austrialia del Espiritu Santo.' The word 'Austrialia' was intended to pay a compliment to Philip III of Spain (a Hapsburg sovereign, and as such a member of the House of Austria) as well as to convey the meaning that this new land was a southern continent. The word was chosen, says Quiros, 'from his Majesty's title of Austria.' But Torres could have told him, and perhaps did, that he had by no means discovered a continent, but merely an island of no very large proportions. Quiros had never been within five hundred miles of the real continent. Torres had seen it, but did not know that he had. However the dawn of discovery had now broken.

The first Dutch vessel known to have visited part of the Australian coast was the Duyfken, despatched to examine the coasts and islands of New Guinea. This yacht, which was commanded by Willem Janszoon, was actually in Torres Strait in March 1606, a few weeks before Torres sailed through it. But provisions ran short, and nine of the crew were murdered by natives, who were found to be 'wild, cruel, black savages'; so that the Duyfken did not penetrate beyond Cape Keer-weer (i.e. Cape Turn-again), on the west side of the Cape York Peninsula. Her captain returned in the belief that the south coast of New Guinea was joined to the land along which he coasted, and Dutch maps reproduced this error for many years to come.

Cook, in his voyage of 1770, did not claim that he accomplished a feat of discovery when he took his ship through Endeavour Strait, (which lies between Cape York, the nothernmost point of the Australian mainland, and Thursday Island to the north) and thence west to Cape Town. The authentic record of Torres' voyage had been found in the Spanish archives at Manilla in 1762; but, though Cook had not seen a translation of it at this time, he knew that the matter of the separation of New Guinea was by many regarded as uncertain. So he cautiously wrote that 'as I believe it was known before, but not publicly, I claim no other merit than the clearing up of a doubtful point.' After threading his way through the labyrinth of reefs and islands, and getting into safe water, Cook landed at Possession Island on August 23 (by the log, August 22), and 'took possession of the whole eastern coast by the name of New Wales,' or, as he wrote in a letter and in two copies of his journal, 'New South Wales.' 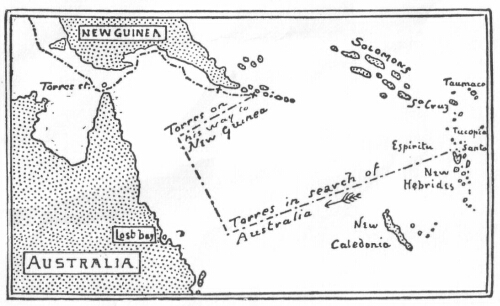 Torres Track. From The First Discovery of Australia and New Guinea Chapter XII