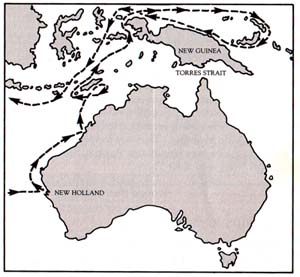 Dampier was born in England. His parents both died before he left school, and at his own desire he was sent to sea. After making some voyages he joined the navy in 1672, and was present, as one of the sick on a hospital ship, at the battle of the Texel. Early in 1674, having left the navy and been offered the position of manager of a plantation in the West Indies, he sailed to Jamaica. After a few months there he again went to sea, in 1675 joined a vessel engaged in the logwood trade, and lived a hard and dangerous life among men who were largely buccaneers.

In 1683 sailed on a vessel called the Revenge, captained by John Cook to Africa. Then, in August 1685 he transferred to the Cygnet under Captain Swan and became navigating officer. They sailed across the Pacific to Guam, from there to the Philippines, where they stayed for some months, to the Pescadores Islands, and south again to the Celebes. In January 1688 Dampier actually landed in northern Australia at King Sound or Collier Bay. From there he sailed to Sumatra and then to the Nicobar Islands, where early in 1688 Dampier left the ship and put an end to his buccaneering days.

In May 1688 Dampier set out from Nicobar with seven companions in a kind of outrigged canoe, and almost miraculously found his way to Sumatra. There he signed on with a Captain Weldon and went to Tonquin and made other trading voyages. In January 1691 he took ship to England and arrived in September. He had been away 12 years and had returned practically penniless. Not much is known of his life for the next six years, but part of the time must have been spent in preparing and seeing through the press the account of his travels which appeared in 1697, A New Voyage Round the World. Its success was immediate and two years later it was in a fourth edition. Dampier was given a position as a "land carriage man" in the customs. He suggested to the admiralty that one of the king's ships should be fitted out to explore the coast of New Holland, and as a result Dampier was placed in charge of a small ship, the Roebuck, carrying 12 guns, 50 men and boys, and provisions for 20 months.

On 30 November 1698 he got his final instructions to sail by way of the Cape of Good Hope. In January 1699 he set sail from the Downs and from the very start had trouble with his second in command Lieutenant Fisher, who when the ship arrived at Bahia, Brazil, was put ashore. After a stay to take in stores, a south-easterly course was taken and the Cape was sighted on 6 June. A favourable wind brought the ship to Australia, and early in August Dampier landed at Shark's Bay on the west coast, but had difficulty in finding water. He then turned and followed the coast to the north and on 21 August reached the Dampier Archipelago. His search for water was still unsuccessful, and he was obliged to sail to Timor. Thence he went east and reached the southern coast of New Guinea on 1 January 1700. He explored much of its western and northern coast, and discovered Dampier Strait dividing New Guinea from New Britain. He might quite possibly have sailed on and anticipated Cook's discovery of the eastern coast of Australia, but the Roebuck was now leaking badly. He made for Batavia where the ship was repaired and sailed for England on 17 October.

It was with great difficulty that the Cape was reached on 30 December, and St Helena on 2 February 1701. On 22 February the Roebuck sprang a fresh leak and Dampier was obliged to beach her at the harbour at Ascension. On 3 April Dampier and his crew were rescued by passing ships and taken to England. In his absence his ex-lieutenant Fisher had not been idle and had worked up a case against him. A court-martial was held in 1702 and the verdict went against Dampier. He was adjudged not to be "a fit person to be employed as commander of any of Her Majesty's ships". Dampier had a good case against Fisher, but had probably irretrievably injured it by his leaving Fisher in gaol at Bahia without means of subsistence. There appears, too, to have been a good deal of doubt as to the justice of the verdict, as in less than a year official approval was given to Dampier's appointment as commander of the privateer St George. He had a roving commission to proceed in warlike manner against the French and Spaniards. He sailed on 30 April 1703 but met with a series of misfortunes. Dampier was a great adventurer but he was not a good disciplinarian, and moreover his vessel again proved to be unseaworthy. He eventually returned to England towards the end of 1707.

In 1700 he published A Supplement to the Voyage round the World titled Two Voyages to Campeachy; A Discourse of Trade Winds. This was followed by the Voyage to New Holland in the year 1699, published in two parts in 1703 and 1709.

Dampier was a great voyager. Though in his earlier days a buccaneer, regarded by some writers as little better than a pirate, he was quiet and modest in manner and scientifically minded. While his companions were drinking or looting, he spent his time studying the plants and the living life of the country, and writing them up in his journals. These formed the basis of his Voyages, "the best books of voyages in the language" Masefield has called them. To Australians he has the great interest that he was one of the earliest Englishmen to land in their country. He explored a good deal of the western and northern coast, and had his vessel been better found he might quite possibly have been the discoverer of the eastern shore. From Dictionary of Australian Biography.